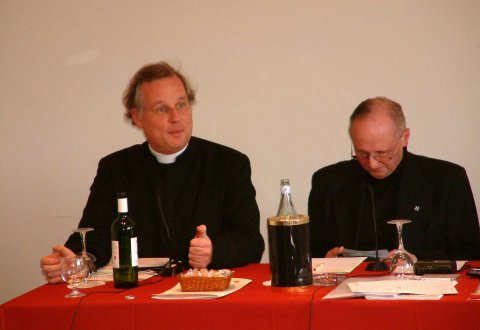 I am very grateful for this opportunity to address you today. In the USA and France you may have some friendly bishops but in Germany things are a little different. Today, however, I can mention some good conduct about the traditional Mass from a bishop in Berlin. This has come about perhaps because of the considerable financial crisis, something unheard of in Germany up till now. Now churches are being sold to anyone who has a decent use for them. Things are changing. Our new little community, which has five members, is called The Institute of St. Philip Neri, who was a glorious apostle for Rome. We have some hopes that he can repeat some of his miracles for Berlin and be a good guide for an effective apostolate there. Our community life is modelled on the Oratory but we do not call ourselves Oratorians so as not to encounter any diplomatic or juridical difficulties with the existing Oratorian communities.

May I tell you a short story as to how I came to celebrate the old Mass because this is what we are trying to do in Berlin at the moment. When I did my studies in Bonn and Paris and five years in Rome at the Gregorian I was completely convinced that the Mass of Pope Paul VI was nothing else but the continuation of the old Mass. I took a great deal of trouble to celebrate the new Mass in the correct way. I was ordained in 1986 but it was not until 1990 that I started thinking about the new Mass and how it came about. This was bought about after a spontaneous visit to the French abbey of Le Barroux on the advice of a friend. On the evening when I arrived there I was asked whether I wanted to celebrate Mass in the old or new rite. As it was 1990 and the old Mass was allowed I said I would say the old Mass but did not realise what I was starting. I spent the entire night studying the rubrics in French for the Low Mass and made notes on a small rail ticket I had for the French train, the TGV. It went reasonably well, although it probably took an hour ….. and I am sure I lost a little weight.

Afterwards, I was sure of three things; the first was that this was really the Missa Sanctorum – the Mass of the saints. All I knew about the saints from my early childhood fitted that Mass, it didn’t before because, for a vision, for example, the new Mass is much too noisy. How could Saint Teresa have a vision in the new Mass – there is too much fuss for that. Then, it is a Mass for the priest, Missa Sacerdotes. Up till then I had to make a real effort, even a physical effort to make the Mass dignified, pious and sacrificial; it was a fight and, at the age of 32, I had started wondering whether I could support that for my whole life. And the third thing, that may surprise you, was that when I was finally able to celebrate in the abbey church at one of the side altars I suddenly had the feeling it was my first concelebration. I had never liked concelebrating but I was forced into some of them and always found that they made the splits in the clergy very obvious. You see it when you look at the hands, some believe in the sacrifice, others stand for a meal. Yet in Le Barroux with priests all standing at separate altars it was one sacrifice, the same priests with the same ritual, and for me this was a real concelebration. It was less obvious and nothing was forced, in a materialistic sense, but it was the real thing.

I started thinking at that time that something like Le Barroux could be made possible for secular clergy, for lay people who want to come to the old Mass, a sort of a parish structure or something like it. After Barroux I studied in Rome for three years for a doctorate, then I was two years in a parish in Austria. I then became a victim of ‘We Are The Church’ movement and everything that goes with it. In this very friendly parish, a good village, were two representatives of this movement and they had the press on their side. I had to leave the parish but eventually, as people put pressure on the bishop and the authorities, the parish was taken over by good priests and is one of the best parishes in Austria today. It is probably the first parish in Austria since Vatican II where the high altar has been re-installed and consecrated by the military bishop about two years ago. Communion rails and other things have also been restored. It is still mainly the new rite but the old rite is now being said so things are moving in the right direction.

When I was forced out of that parish in Austria I knew a very kind priest in the Society of St. Pius X and in my desperation I took refuge in that Society and worked for them for six years in Berlin. I tried to build up the community for the Society and we had three vocations. After the pilgrimage of the Society to Rome and the generous offer of Cardinal Castrillon-Hoyos I began to wonder because I could understand why the Society should be censorious of the offer but, for myself, I was convinced one couldn’t really reject such an offer. I then travelled to Campos, in Brazil, for the consecration of Bishop Rifan where I met and talked with Cardinal Castrillon-Hoyos for about two hours. He made it very clear that his great aim was to get the whole Society in a proper and visible structure within the Church. If this was not possible he would be prepared for smaller groups. He kept his word. When four seminarians, two deacons and two more seminarians from the German seminary of the Society of St. Pius X went to Rome this year in February he did all he could to allow us installation in the diocese of Berlin with the status of something like a personal parish. We hope that things will now progress, we are in quite a beautiful church with five aged nuns and we are hopeful of keeping that church but it still needs financial support.

We have two students in Rome, at the Angelicum, where there are some good younger professors who are quite good on St. Thomas. They are living in the Czech College where there is something of a traditional wing, one floor, where men from various different communities are living in a kind atmosphere. Cardinal Ratzinger keeps an eye on us because he understands the German situation more than anyone else could. It is very difficult because in Germany everything is well-structured, solid - even too solid - but in this solidity you will find all the heresies you can think of, but the outward appearances are very clearly regulated. It is very difficult to get a foothold in this solidity but Berlin is perhaps easier because it is a little way off the normal Catholic Germany; it is not Cologne or Munich where everything is under strict supervision. Also, Berlin is an atmosphere of a nearly de-Christianised city where for generations people are away from it all. Luther is not the Father of the Churches, as Cardinal Lehmann said, but is the grandfather of paganism [much laughter and applause at this remark].

In Berlin there are not the theological or ideological struggles about theological questions, they come to our Mass and suddenly it is a whole new world. And that’s a great chance. In Cologne and Munich you think you are still in wealthy Germany, as it was 20 years ago, but in Berlin you are at five minutes after twelve and there are young intelligent people who look for new solutions. I had journalists in my apartment some time ago and one of them, a German from an important weekly newspaper, said that there is a good market for religious things nowadays. If you know anyone who would like to buy a church in Berlin we could make good use of it.

If any of you have good political contacts you should tell the officials in the Vatican that if they want the confidence of traditional Catholics they have to keep on with their support even if it very small. With three students and a Lithuanian deacon there is a great need for financial support so I will be grateful for any ideas, suggestions, or contacts, but we place our trust in Our Lord, Our Lady and St. Joseph. I thank you all.

All information in connection with the Institute will be found under : institut-phillip-neri (German only) OR phone or fax (German/English/French/Italian) on +49 (0)30 81 82 16 76.

Should anyone wish to help with a financial contribution please donations directly to: Kirche in Not – LIGA – Bank, Munich, Germany. Bank number 75090300 – account number 2152002. For INTROIBO, Institut St. Philipp Neri, Berlin, Germany. OR contact your national bureau of Aid to the Church in Need [Aide a l’Eglise en-Detresse: Aluto alla Chiesa chi Soffre; Kerk in Nood] and state that your donation is for the St. Philipp Neri Institute in Berlin.